Francis Thomas “Bill” Hanley was born at Millaa Millaa on the Atherton Tableland in 1922.

In 1942, Bill enlisted in the AIF and rose to the rank of Sergeant in the Royal Australian Engineers 5th Division. He spent 18 months in New Britain building a military hospital and 1944-45 in Jacquinot Bay until the surrender of the Japanese forces.

After the war, he worked in Innisfail and later Brisbane with the Postmaster General’s Department, and lived at Morningside.

He pursued a successful career as an Administration Officer with the PMG (later Telecom Australia).

Bill was a tenor drummer with the Queensland Irish Association Pipe Band when it was re-formed after World War II. Bill and fellow bandsman Les Shaw, in the late 1950s, co-founded the QIA Dancers.

He has been a member of the Queensland Irish Association and the QIA Pipe Band since 1949 – that is more than 70 years.

He was awarded Life Membership of the Queensland Irish Association in 1977.

There was always a strong relationship between the QIA and the Irish Embassy, and political leaders from Ireland.

Of particular note is the capital visit of Mary Robinson, the President of Ireland, to Australia during the term of Bill Hanley’s Presidency.

Bill and his wife Beverley had previously met Mary Robinson in August 1992 when they had morning tea with Mrs Robinson at her official residence in Ireland, Áras an Uachtaráin.

In October 1992, Bill and Beverley were invited to attend lunch by the Prime Minister Paul Keating at Parliament House for the President of Ireland.

They had previously attended the lunch for Mrs Robinson at the Press Club the day before. In all, they spent four days in Canberra, including a visit to the Irish Embassy.

Bill Hanley and his wife flew back to Brisbane with the President of Ireland, her entourage, and the accompanying press.

On the following morning, Mary Robinson visited the Irish Club and left on a tour of Queensland. A Civic Reception was then held at Brisbane City Hall, followed by a Capital Reception and personal visit to the Irish Club. The club was packed with well-wishers.

Seen below is the president of Ireland, Mary Robinson, with Nick Robinson and Bill and Beverley Hanley, signing the visitors’ book in the boardroom of Tara House. 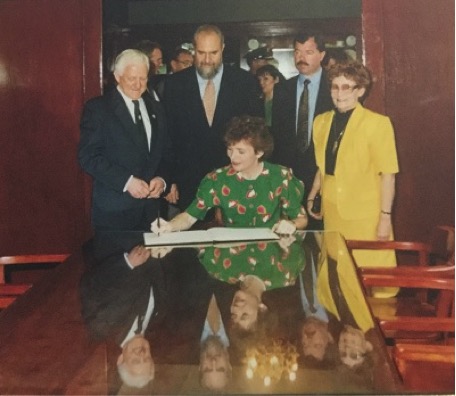 Bill and Beverley visited Áras an Uachtaráin again in 1995, after Bill’s retirement as President.

Bill Hanley said that his greatest achievement was taking the QIA Pipe Band from a C-grade band to A-grade Champions in Australia, then to take that band to Ireland and Scotland to the World Championships.

In 1995, he was awarded the Medal of the Order of Australia (OAM) for “Service to the Development of the Queensland Irish Association”.

Bill was also instrumental in the re-establishment of the Celtic Council of Australia in Queensland in 2003 and has been Patron of CCAQ since then.

Celtic Council of Australia had previously awarded him the Celtic Honour of Cyfaill y Celtiad (CyC), meaning “Friend of the Celts” in Welsh.

It is only in the last 12 to 18 months that Bill has suffered a decline in health and decreased mobility. He attended the 2019 St Patrick’s Eve Dinner – having only missed it on one occasion since 1949. 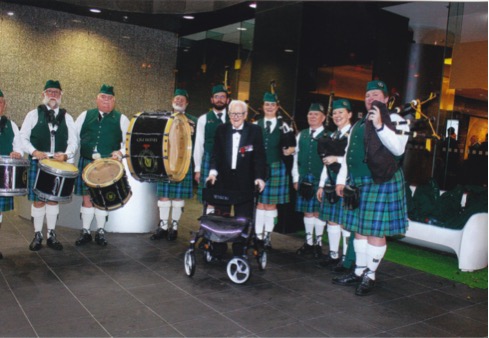 Bill and his beloved pipe band at the Pullman Hotel at his last St Patrick’s Eve Dinner in 2019.

Francis Thomas “Bill” Hanley OAM CyC passed away peacefully in his 99th year on 8th October 2020, surrounded by his family.

And now, after a long life well lived, and replete with honours and accomplishments, Bill Hanley is at rest.

Ar dheis Dé go raibh a anam. May he rest in peace.